Packaging Ruby (on Rails) projects can be tiresome as you often end up in packaging hundreds of dependencies. In OBS:Server:Unstable there are currently 201 rubygem packages out of 293 packages in total. Too many for our taste

Not only we were tired of packaging rubygems, also Duncan MacVicar was it and created an OBS source service to download all gems. However, the initial implementation makes use of the download file service (which is great because it makes use of a global cache) but for instance hardcodes the download URLs.
Therefore we decided to extend this service to make use of bundler and creating a vendor.obscpio file instead of adding all files into the package directory.

We also investigated how we can implement a global gem cache and now we will make use of the awesome geminabox as a rubygems.org proxy

Have a look at the pull request if you want to see all details.

OBS allows to build multiple packages from within one package container, so called multibuilds. While this has been around since a while, not everywhere in OBS we’ve been supporting multibuilds as we should. The task of this card was to fix the binaries view to make it show binaries created by a multibuild package. Before that page would not list any binary at all when the requested package was a multibuild.

And here is how it looks now:

This is the package container view, with all it’s build results for every sub-package: 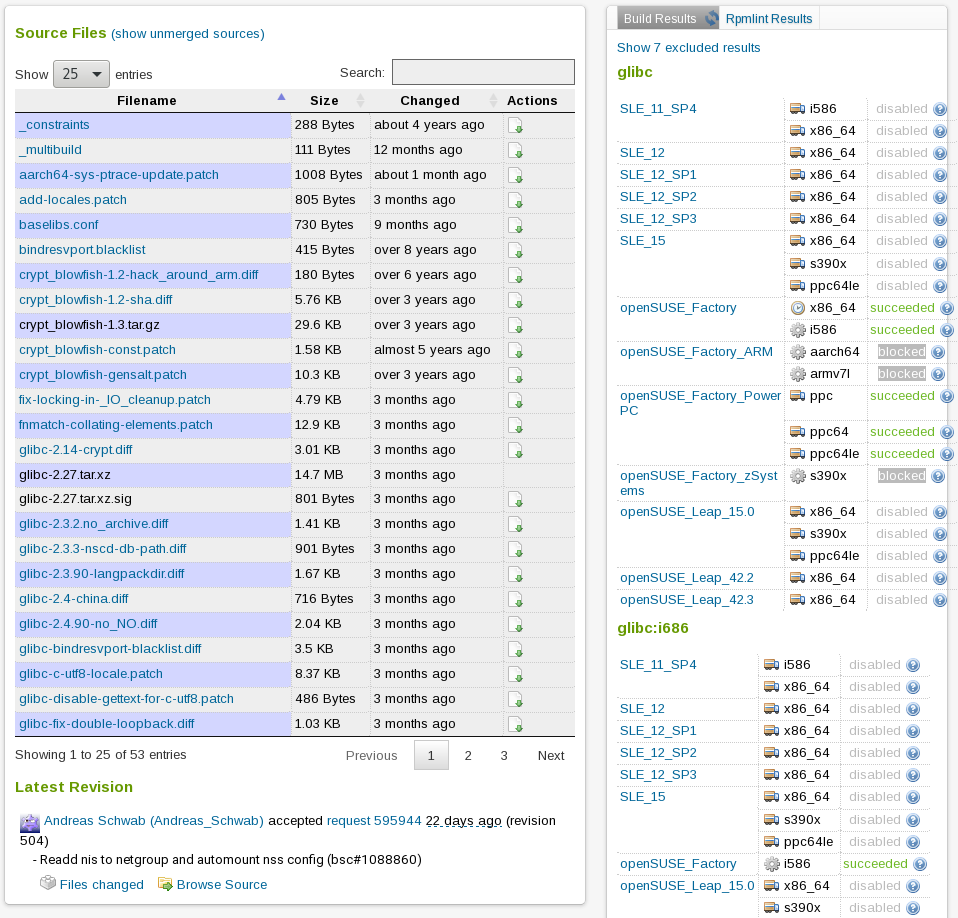 And this is the binaries view of a single multibuild package:

As you can see it now shows each package binary of a multibuild, as it should.

While working on this task we noticed that some of the pages the binaries view is linking to are not showing the correct content for multibuilds. To address this we created follow up tasks for this.

When a request gets accepted in OBS such a request get’s forwarded to the linked upstream project, if such a link is defined. In such a case OBS would go through all request actions that belong to the request and add them to the new, forwarded request. Failures that happen when forwarding a request, are logged as exception and also shown to the user via an error message. Some weeks ago we noticed that there were quite some exceptions occuring in https://build.opensuse.org. So we decided to investigate this during our next sprint.

There were 3 different causes of why forwarded requests would fail:

We had to interrupt our Sprint for a short, one week long, OBS onsite meeting

to Nuremberg and meet with the rest of the team to discuss where we are heading next with the development of OBS.

As a result of these discussions we decided to:

Beside discussing all these things and mob programming some first Health Monitoring metrics, we also drank some beer and ate Schäufele.

We hope you enjoyed the read!